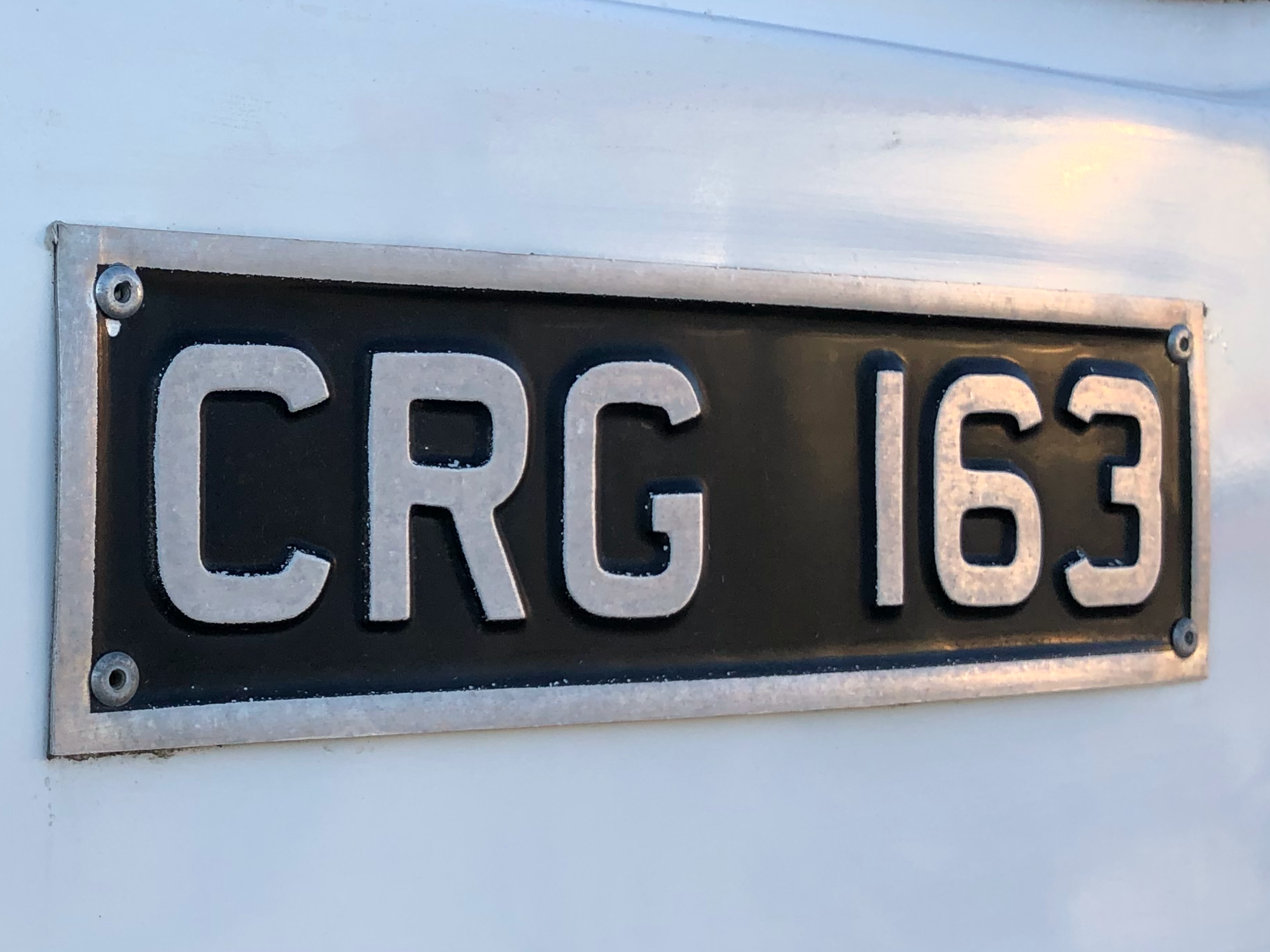 Following ERG163’s withdrawal by Crosville in the 1984 it was saved from potential scrapping and an uncertain future by passing into the world of vehicle preservationist under the ownership of Gordon Bate. Gordon lived in the Manchester area and saved and preserved many other Crosville vehicles in his time including now preserved CRG106, CRG111 and CRG530, which would also eventually pass to other owners for further restoration, safekeeping and preservation. It is safe to say that Gordon played an instrumental interim role in saving and securing such vehicles from their ultimate demise. 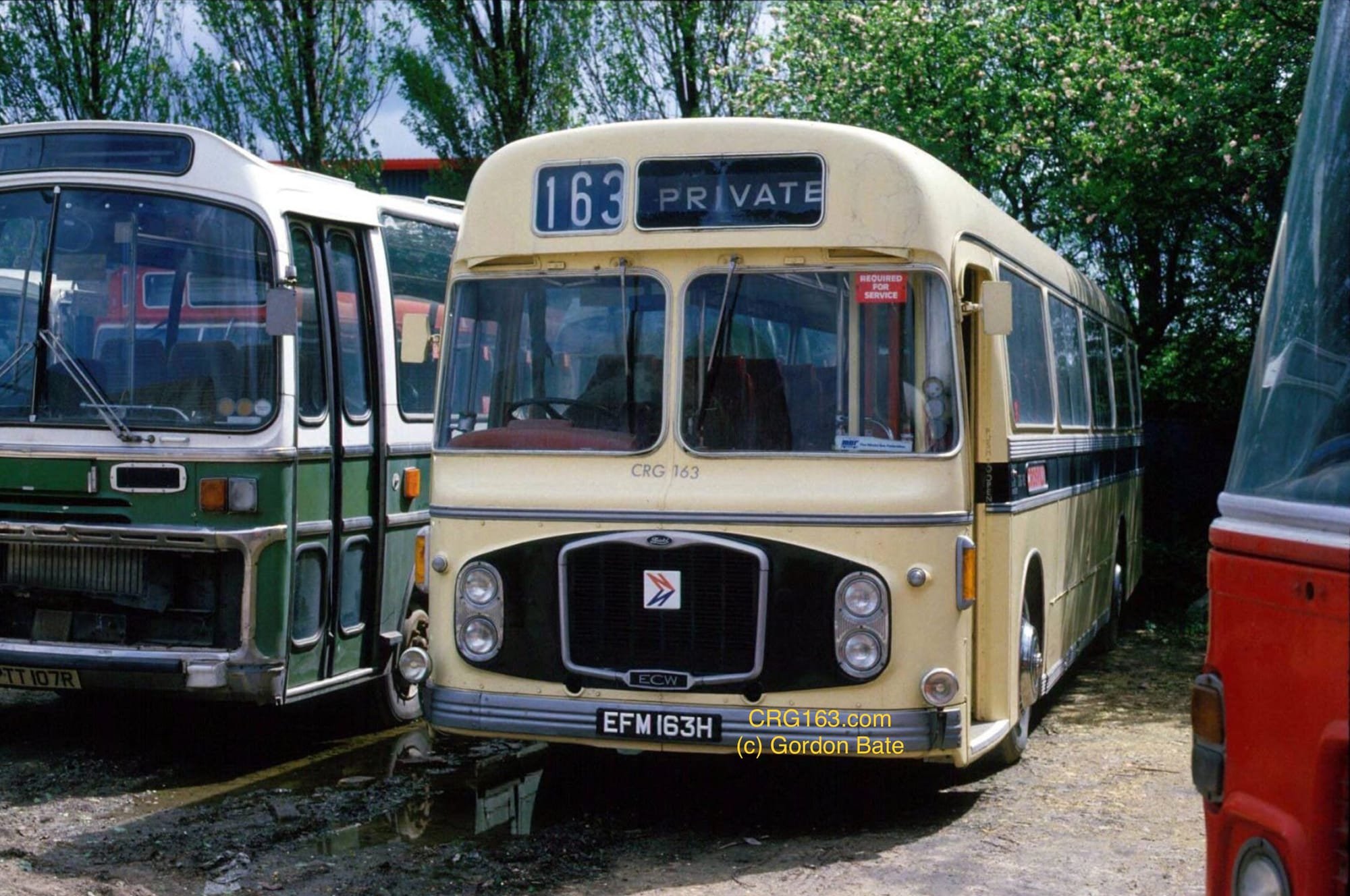 ERG163 having been repainted in CRG163‘s more simplistic cream and back livery under the ownership of Gordon Bate.  Sticker fleet numbers have been applied. 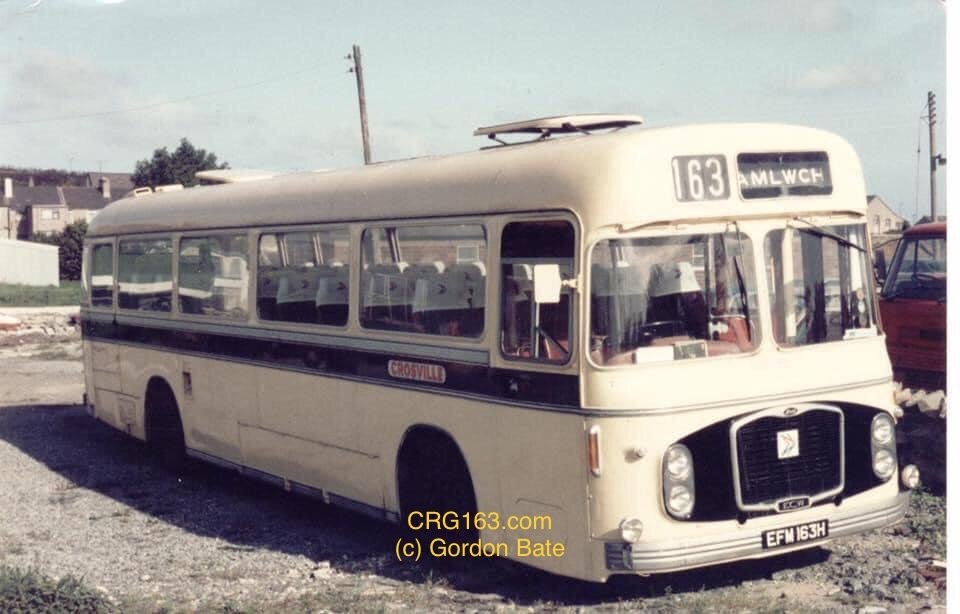 CRG163 returning to her old Crosville home at Amlwch depot, Isle of Anglesey, in the late 1980’s with Gordon Bate.
ERG163 initially passed to Gordon in the dual purpose green and white livery as operated by Crosville. During his tenure of the vehicle he later adopted a derivative of the original cream and black livery but to a far simpler design, reapplying through sticker format the fleet designation of CRG163. Initially Gordon would attend many bus and coach rallies with the vehicle but over time began to withdraw. Over time the vehicle was withdrawn from any public appearance and mothballed, parked up at an unknown location for many years to come, rumoured to be on the outskirts of Manchester, somewhere.

In the year 2000 I got to know Gordon Bate through the vehicle preservation movement and came across 163 as a part of this. I understand that many had attempted to purchase 163 from Gordon over the years through failed attempts either before or during any acquisition process. It is understood that Gordon would meet would be purchasers in the middle of nowhere but never actually taking anybody to the secret location of 163.

However in early 2001 everything changed. Gordon contacted me and offered the opportunity to purchase the vehicle. I remember accepting his offer to visit with excitement.

In June of the following year a date was set, that being the 9th of June, 2002 and I dully travelled with others to a location on the outskirts of Manchester to meet Gordon. Again as with others before I was to meet him at a location in the middle of nowhere. When we met we chatted for a short while before being invited to follow him for a number of miles along country lanes to the hidden location of 163. I remember entering a farm before suddenly seeing 163 appear silently from behind a barn. 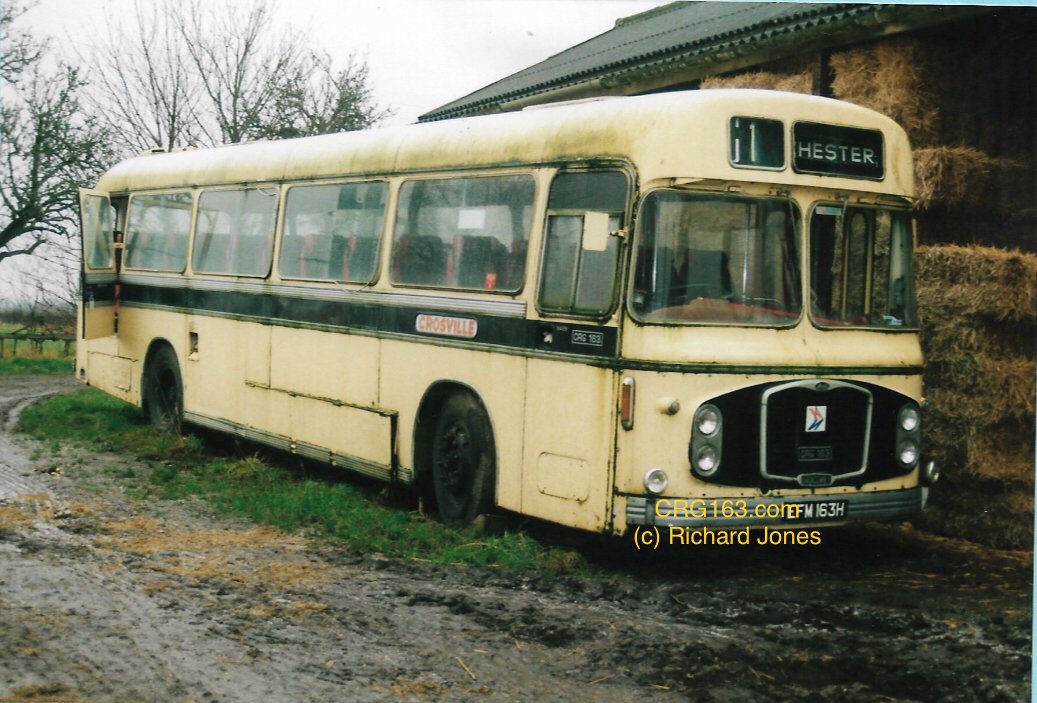 First meeting with ex CRG163 under the ownership of Gordon Bate.
Unfortunately by this time the vehicle had deteriorated as it had not moved for a number of years. The vehicle was thoroughly checked over by a mechanic friend for any issues such as air pipe or water issues as well as other roadworthiness checks. On receiving the green light from my mechanic friend the deal was done. Before we departed I remember Gordon affectionately placing his hand on the front of 163 and saying “look after yourself old girl”. Suddenly we were homeward bound returning 163 once again to North Wales. 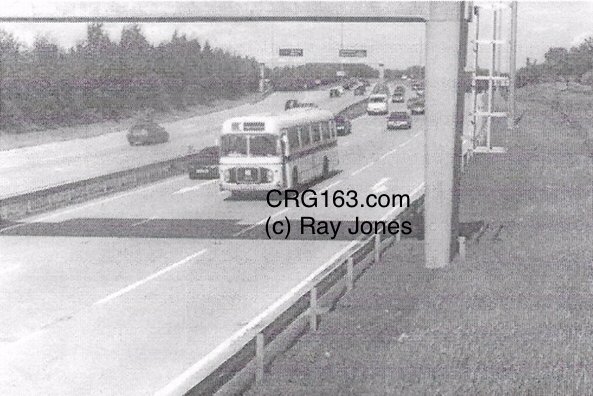 Ex CRG163 heading westbound near Chester - homeward bound (photo courtesy of Ray Jones).
Her recovery did not pass without incident, but through engineering support from a friend and perseverance she travelled home from Manchester to North Wales. 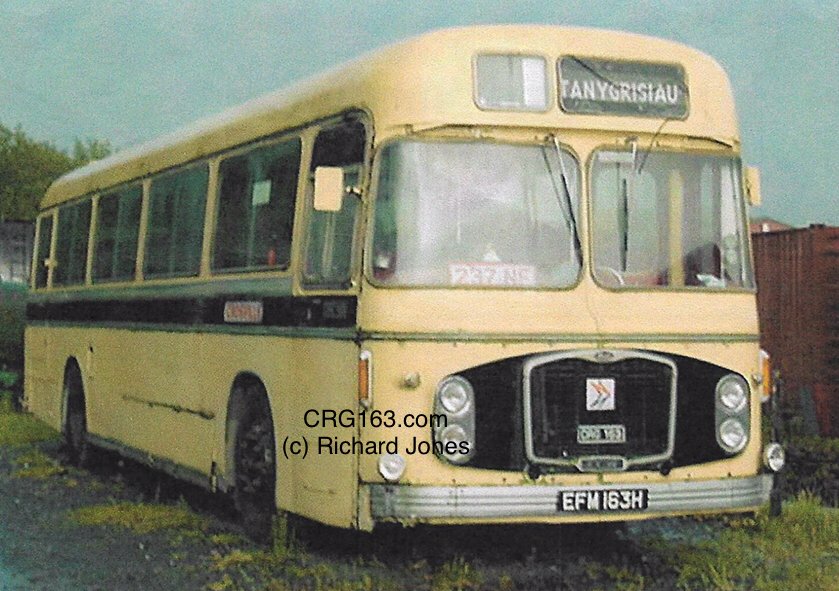 Ex CRG163 arrives home, back again in North Wales.
At this time I must pay homage to Gordon Bate for saving so many Crosville vehicles including mine from a more unstable future. Sadly Gordon is no longer with us unfortunately, however 163 lives on as well as his initial efforts of preservation. 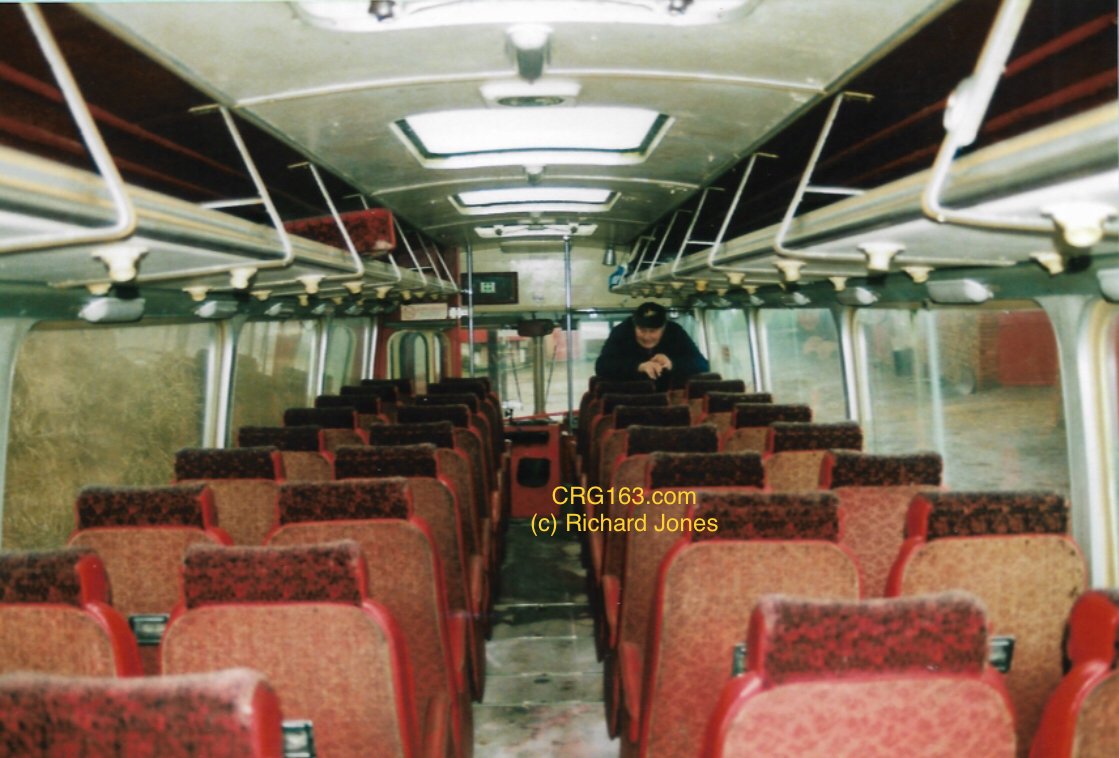 CRG163 undertook a rigorous restoration process with Richard between 2002 and 2004 with grateful support from his father, late mother and others before being unveiled in June 2004 in her restored NATIONAL white livery. 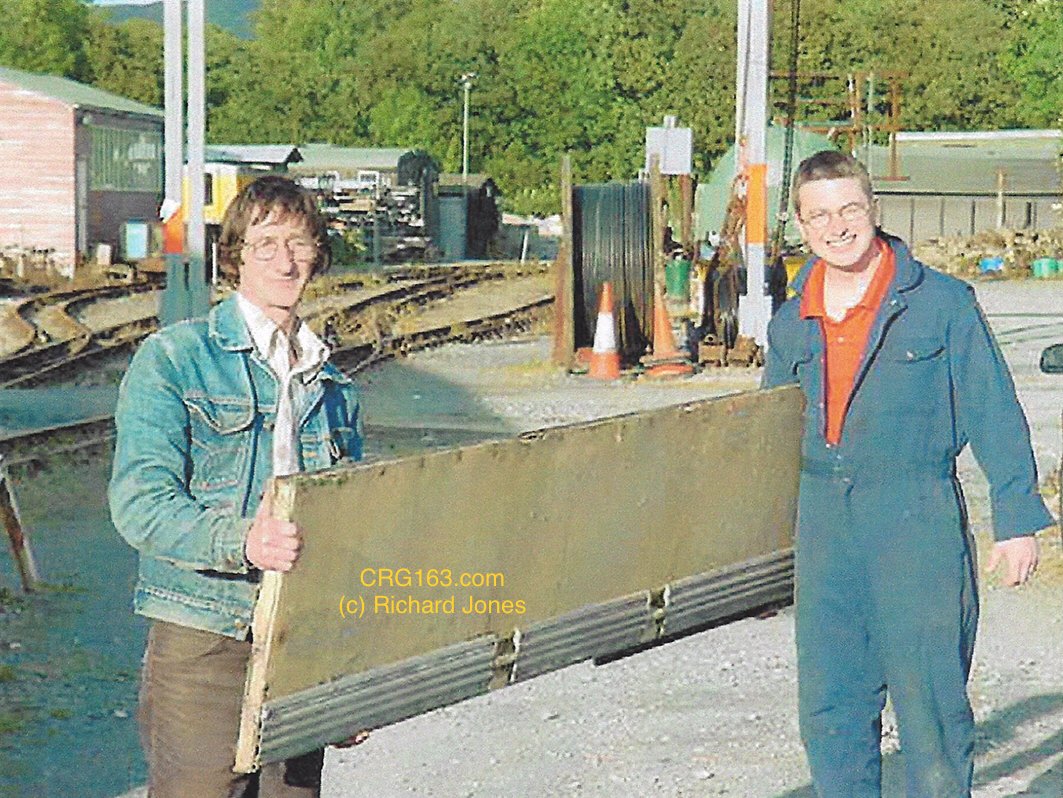 Richard Jones and his father tackling the reconstruction of one of the side lockers.
A lot of travelling was undertaken across the country, tracking down and sourcing parts.

This included but not restricted to:


Completion of restoration and unveiling

The new livery chosen for restored CRG163 was kept a secret from everyone and was unveiled at the Llandudno Victorian Extravaganza Transport Festival in May 2004. 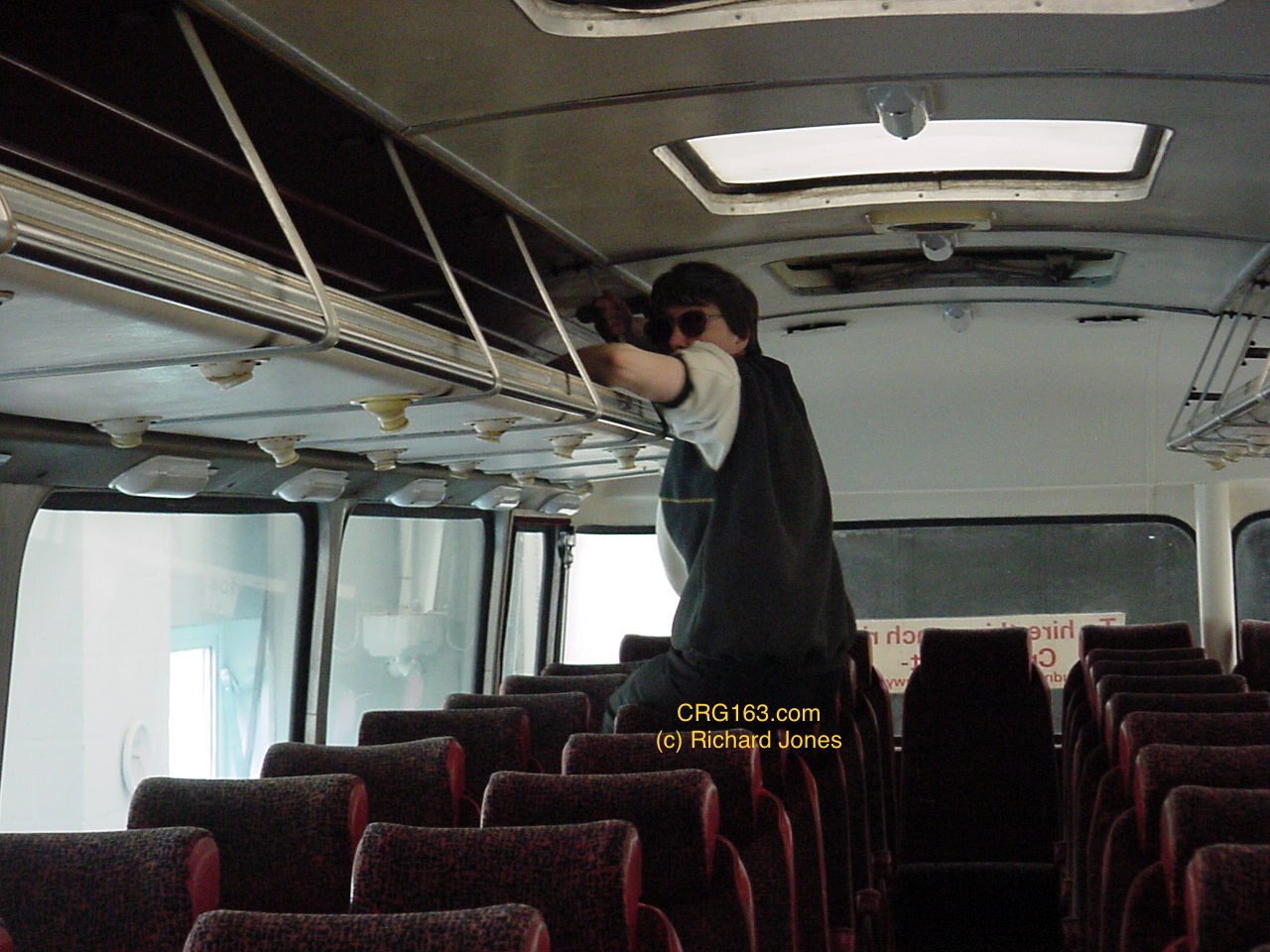 My late mother, Marian Lloyd Jones helping out in preparing for CRG163’s first outing - June, 2004
Much excitement and anticipation was felt on the morning as the two year restoration of CRG163 culminated on this date. 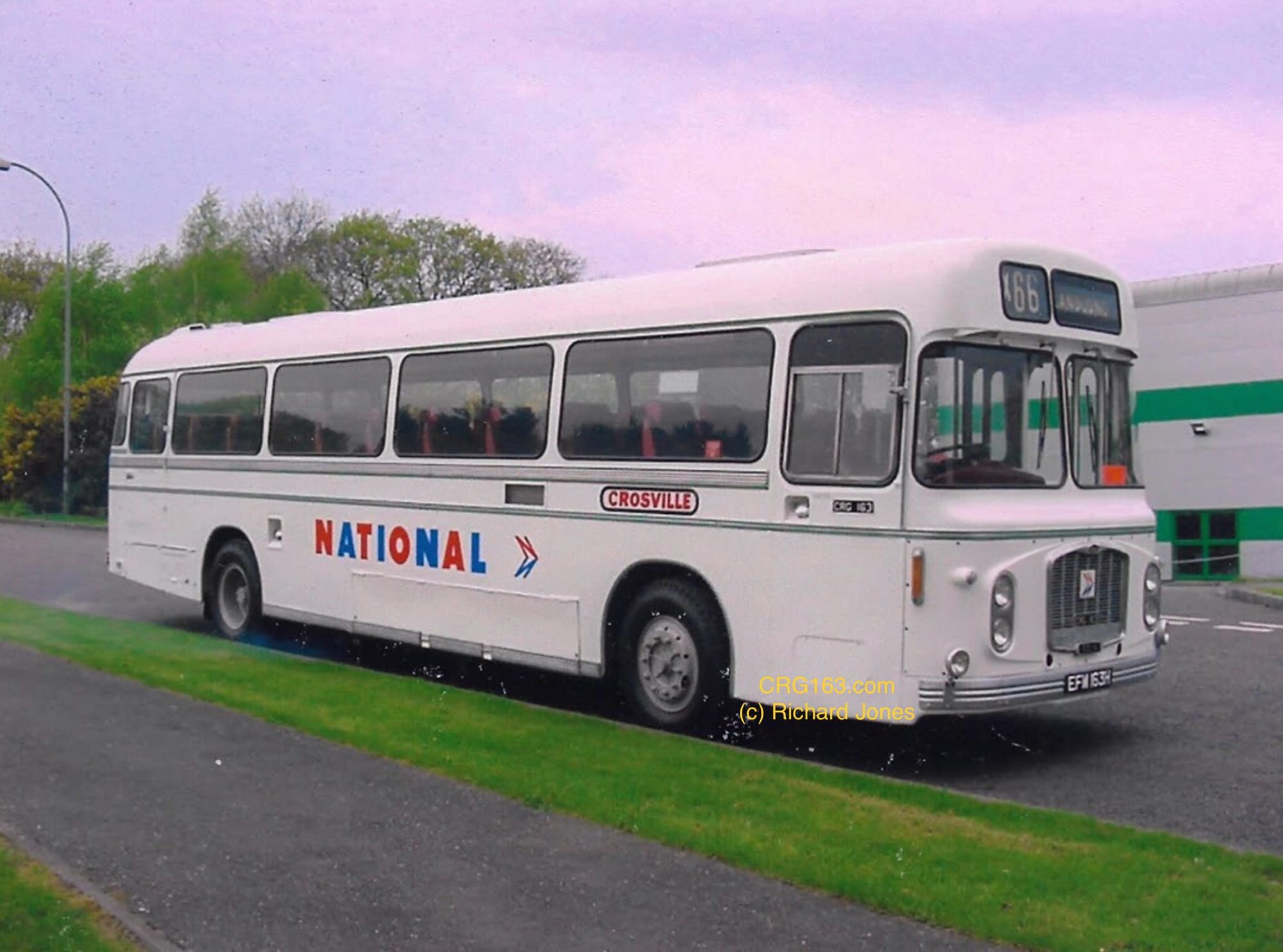 An early morning image of CRG163 before setting off to the Crosville vehicle gathering at the Llandudno Transport Extravaganza - 2004. This was our first public outing following the completion of two years of restoration. 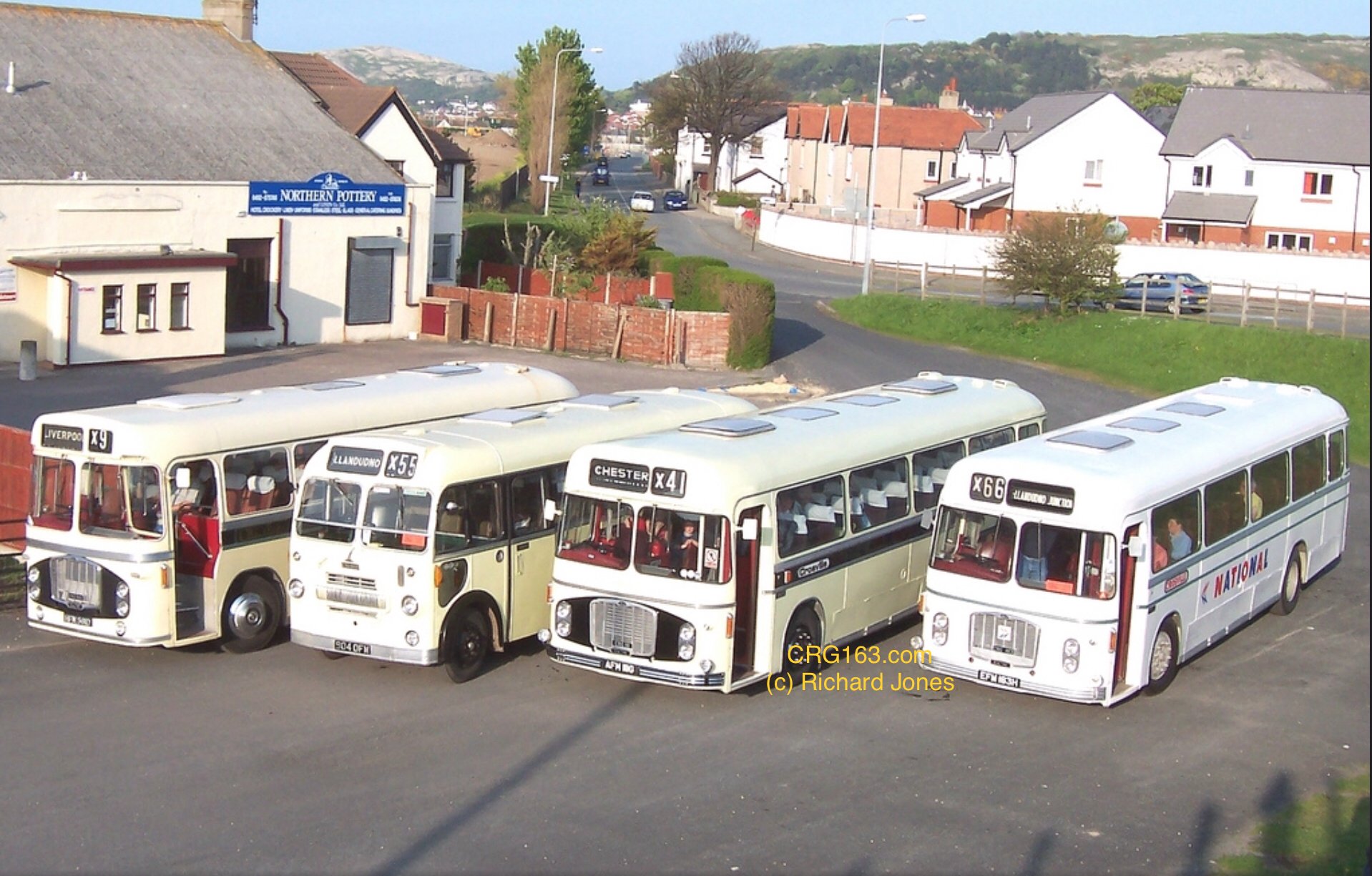 CRG163 - early evening of her public debut into preservation alongside other Crosville vehicles in preservation - Llandudno 2004
From 2004 to 2009 CRG163 attended many bus and coach rallies and events including taking part in celebrating Crosville’s centenary gathering at Rhyl Promenade followed by a historic road run of many Crosville preserved vehicles between Rhyl and Llandudno following the old 409 route. 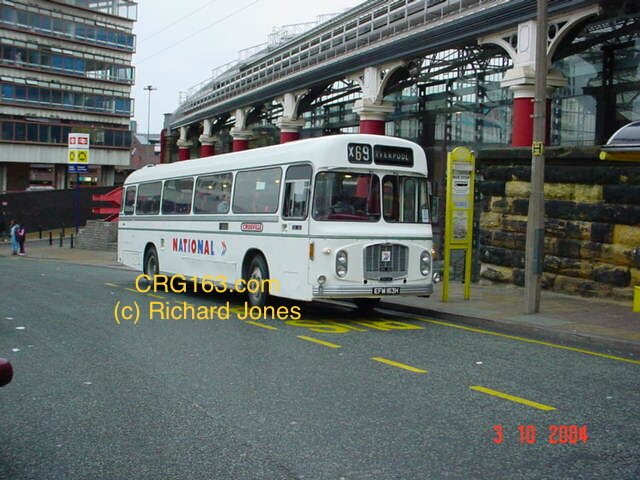 Preserved CRG163 returning to Liverpool Lime Street Station on the 3rd of October, 2004.  CRG163 was originally based at Crosville’s Liverpool Edge Lane depot back in 1970. 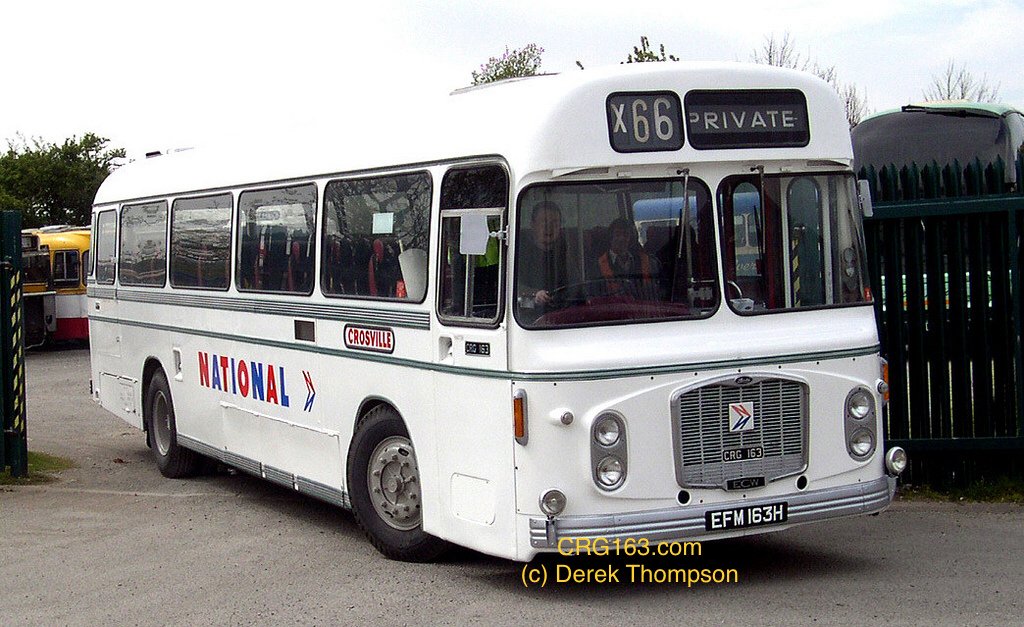 CRG163 in preservation circa 2004 - taken by Derek Thompson.
By then CRG163 had become a celebrity in the bus preservation movement. 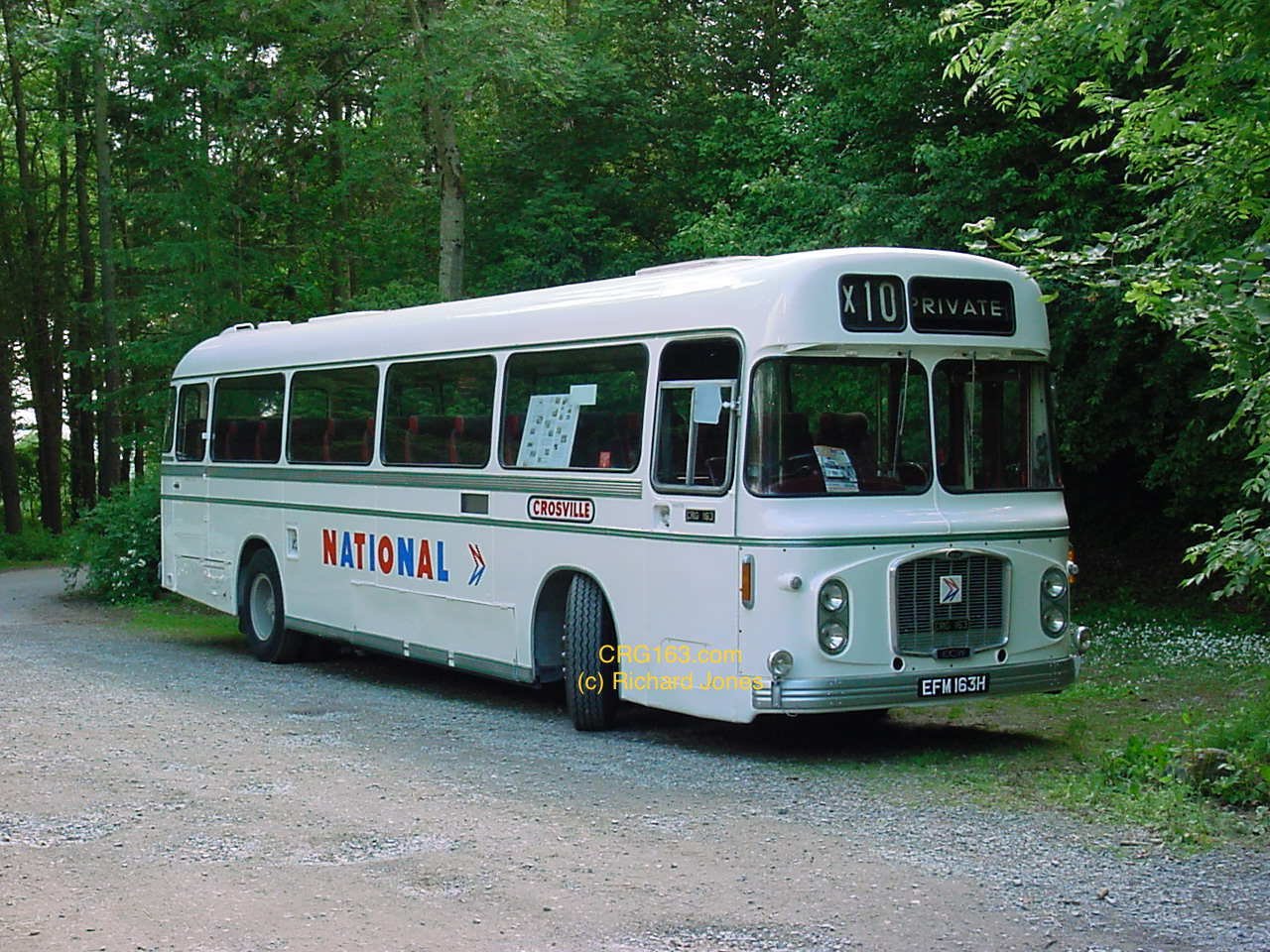 Preserved CRG163 at Glynllifon Estate circa 2005. Bus & Coach Preservation magazine front page - July 2004.
The cover photo was taken of preserved CRG163 passing through one of the famous arches of the Menai Suspension Bridge linking the Isle of Anglesey and the main land.

In June 2004 CRG163 during its preservation become the star on the cover and within a five page internal article of the Bus & Coach Preservation Magazine. 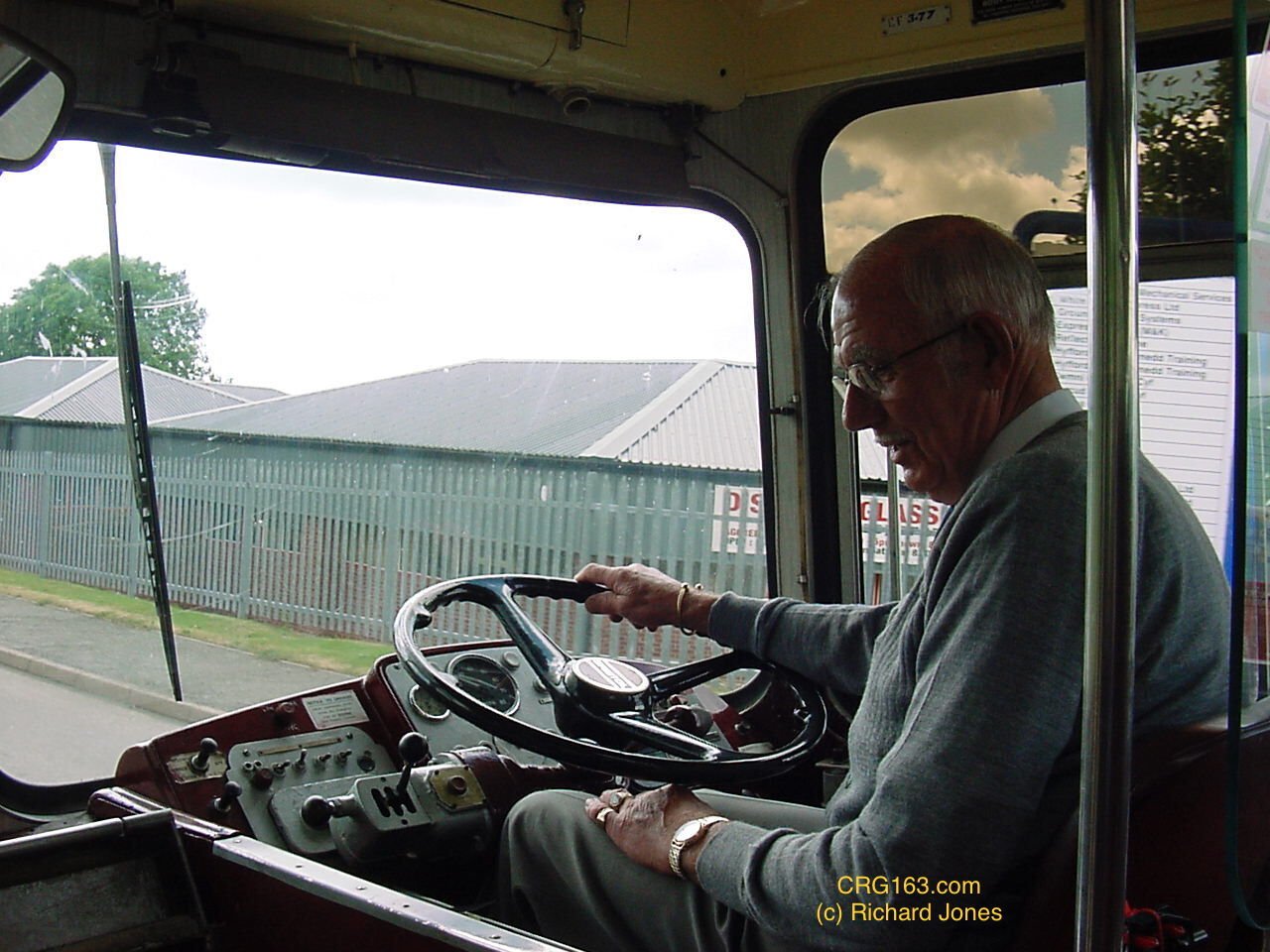 Bob Moelfre, once of Crosville’s depot at Amlwch.  Now retired but once again driving CRG163 but this time in preservation many years later.  In memory of Bob. 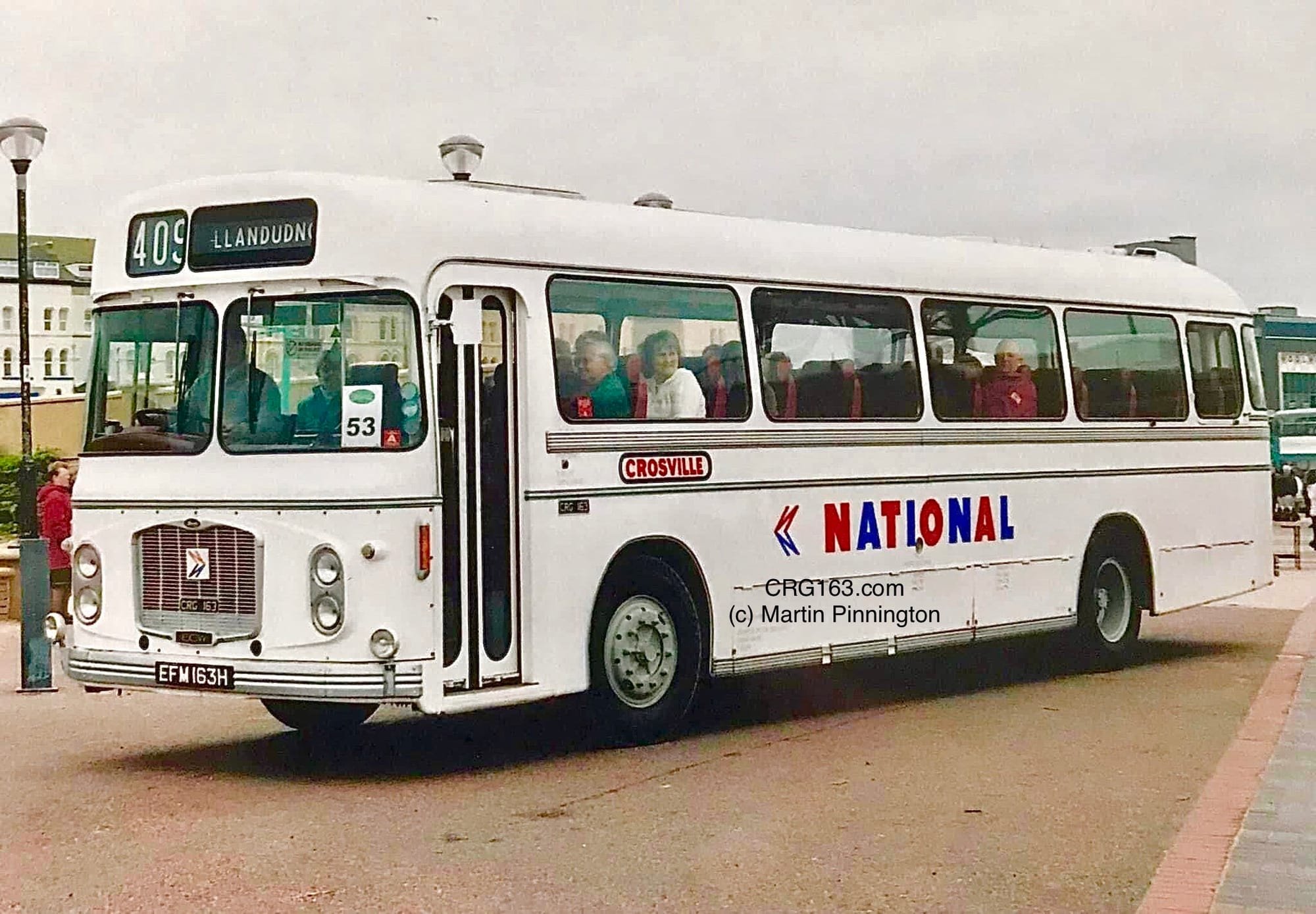 Crosville 100 celebrations, 2006 at Rhyl with me behind the wheel and my late Mother sitting behind.  Photo courtesy of Martin Pinnington with thanks. 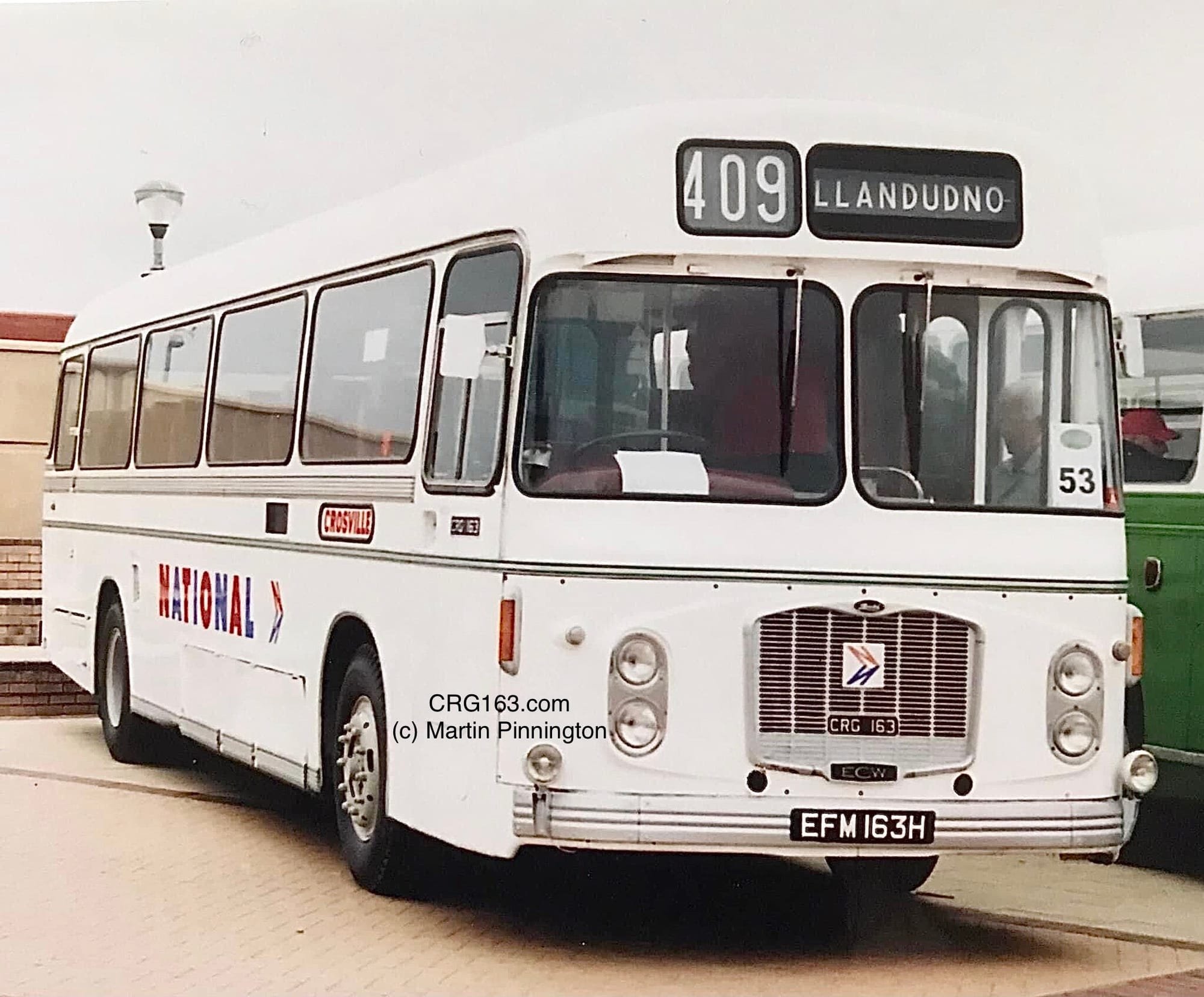 Pictured again at the Crosville 100 celebrations, 2006 in Rhyl.  Photo courtesy of Martin Pinnington with thanks. 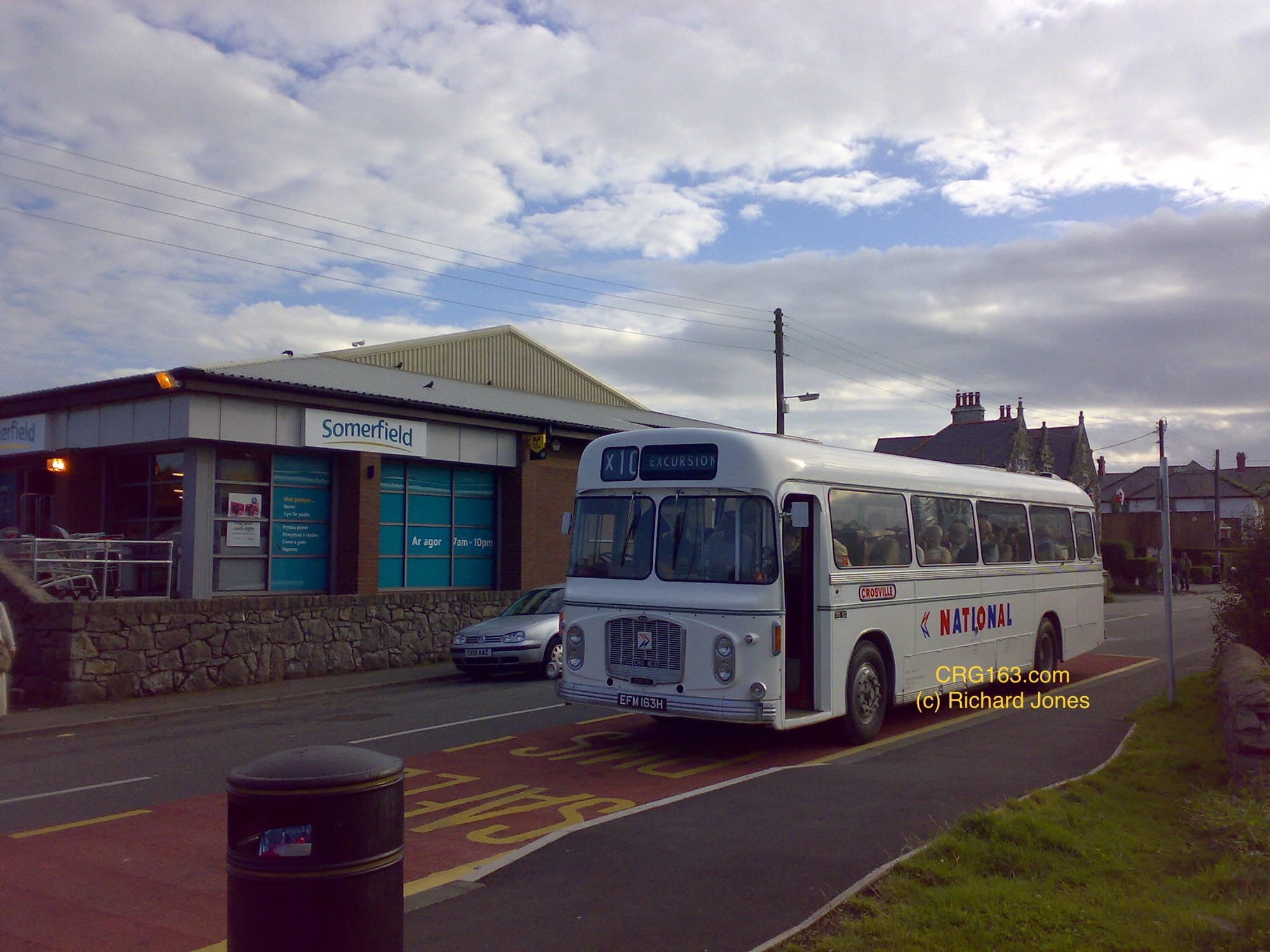 Preserved CRG163 returning home to Amlwch during 2006.  The Crosville depot is sadly demolished, making way for yet another supermarket which became buyers of Crosville sites when vacated and sold.  CRG163 returned to Amlwch displaying route number X10 (the route once operated by CRG163 when ERG163 back in the day between Cemaes Bay and Liverpool) on its destination blind, paying homage and respect for the old depot and staff. 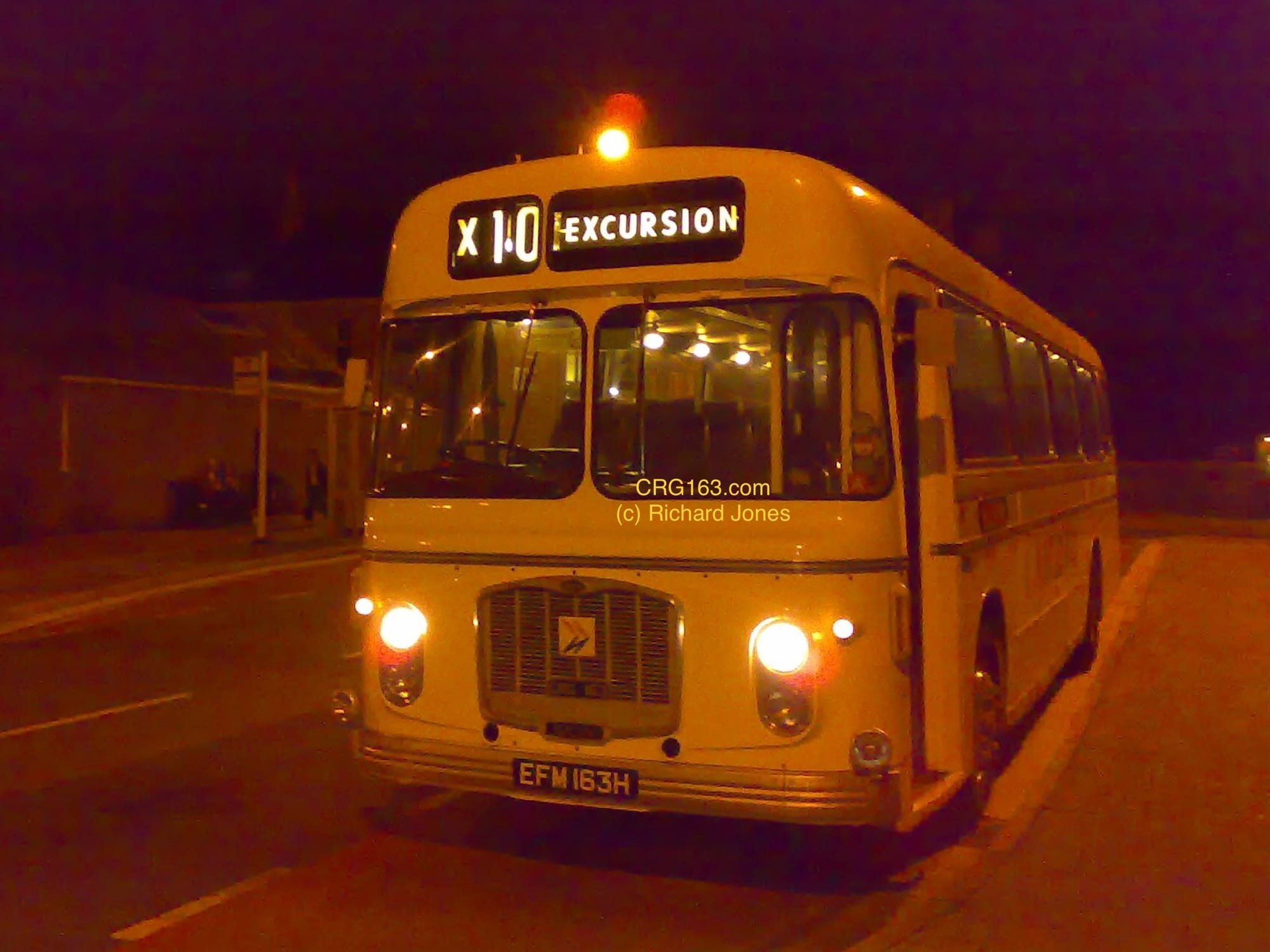 An evening shot of preserved CRG163, parked at the bus interchange at Menai Bridge, Anglesey on its return from Amlwch. 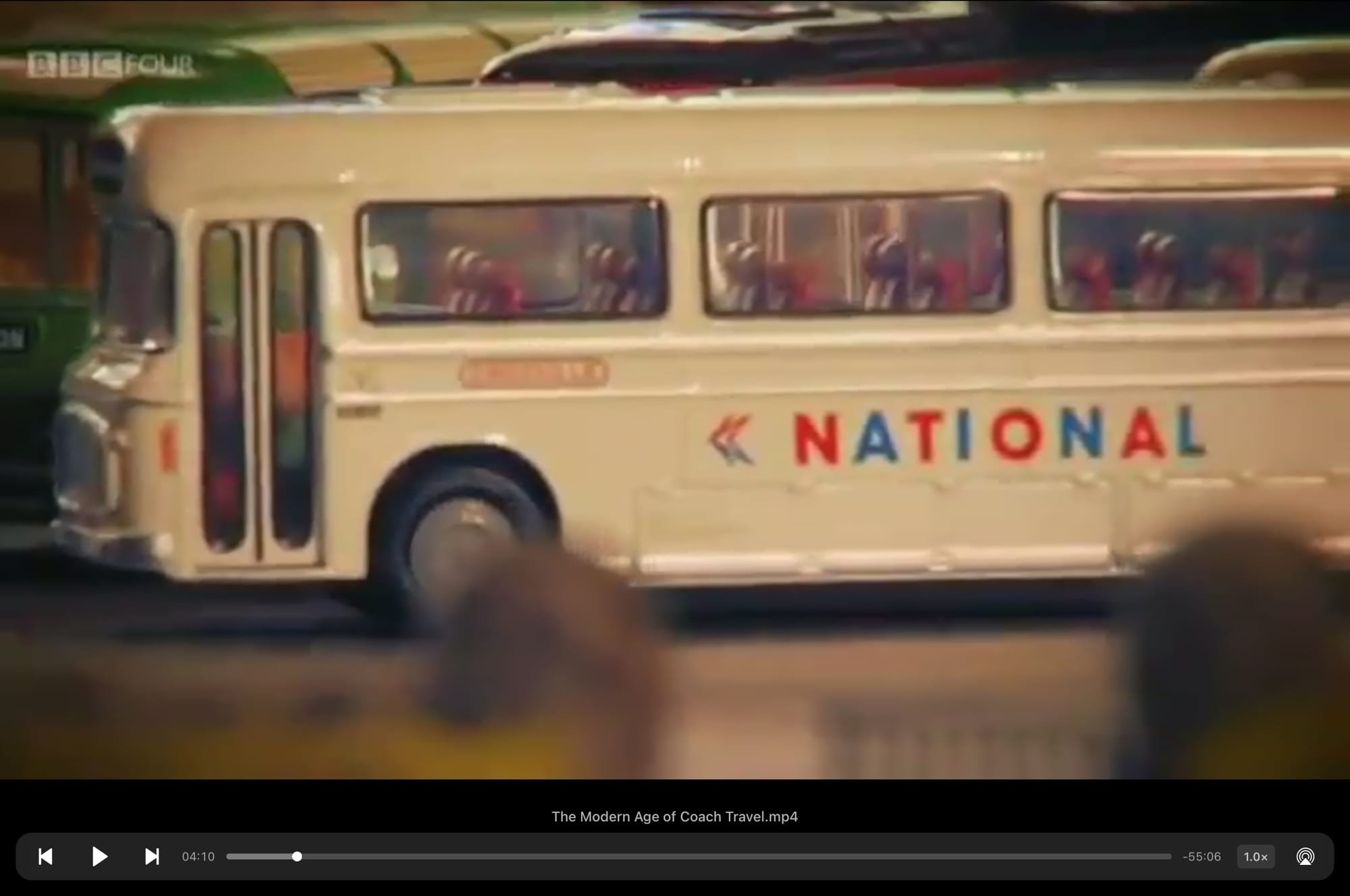 For details of our recent restoration and preservation endeavours please click HERE or our News Page for details.